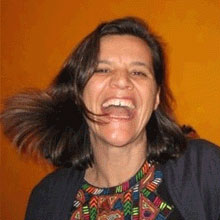 Kirsten Johnson works as a director and a cinematographer. Her first documentary she produced, “Cameraperson,”  premiered at Sundance and won many awards. Her shooting appears in the Sundance 2012 Audience Award winner, “The Invisible War”. In the last year, as the supervising DP on Abby Disney and Gini Reticker’s series, “Women, War and Peace”, she traveled to Colombia, Bosnia, and Afghanistan. She shared the 2010 Sundance Documentary Competition Cinematography Award with Laura Poitras for “The Oath”. She shot the Tribeca Film Festival 2008 Documentary winner, “Pray the Devil Back to Hell’. Her cinematography is featured in “Farenheit 9/11”, Academy Award-nominated “Aslyum”, Emmy-winning “Ladies First”, and Sundance premiere documentaries, “Finding North”, “This Film is Not Yet Rated”, “American Standoff”, and “Derrida”. A chapter on her work as a cinematographer is featured in the book, “The Art of the Documentary”. She is currently editing a documentary on sight that she shot and directed in Afghanistan. Her previous documentary as a director, “Deadline”, (co-directed with Katy Chevigny), premiered at Sundance in 2004, was broadcast on primetime NBC, and won the Thurgood Marshall Award.