The Election Show will be livestreaming on this page beginning at 8:00PM (EST) on Tuesday, November 8th.

It’s Trump vs. Clinton in an epic showdown — and we are right there to cover it minute by minute for you!

From 8:00-10:00PM (EST) NYU Journalism student reporters will monitor election results as they come in, speak to anchors located outside the Clinton and Trump victory parties, interview guests on air and follow the Senate and House races. Join us as we relive the 2016 presidential race, discussing a variety of topics including millennial voters, the use of social media, the Muslim vote, and the importance of political education.

The Election Show will be livestreaming on this page beginning at 8:00PM (EST) on Tuesday, November 8th.
Link to Share: https://journalism.nyu.edu/election2016
You can join the conversation via Twitter with hashtag #NYUElection 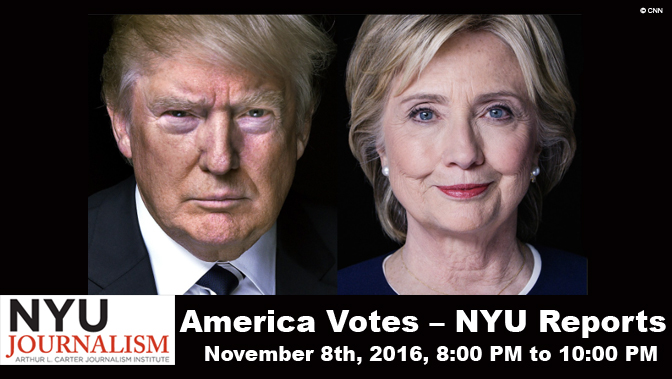