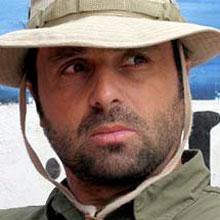 Adrian Mihai, the broadcast operations manager of the Institute, is a freelance videographer, independent producer and multimedia designer. He produced and directed several documentaries: “E Pluribus Unum” (1994), a film that investigates the spiritual milieu of first generation immigrants from Romania, as they become integrated into the various folds of American society; “Someone Has Killed The Sphinx” (1995), a film that offers an analysis of Romanian social realities following the overthrow of Nicolae Ceausescu’s dictatorship, as seen through the staging of “Oedipus,” at the Romanian National Opera House; “Crossroads” (1998), a film that takes a look at Columbia University’s Graduate Acting Program, created and steered by renowned Romanian-American director Andrei Serban; “E Biagoresqo Drom / The Endless Journey,” a documentary about the Roma/Gypsy communities of Romania. Adrian worked as a freelance cameraman for various news organizations such as Bloomberg television news, BBC America, and CNN. Since 1996, he has taught undergraduates and graduates in a course on electronic news gathering.