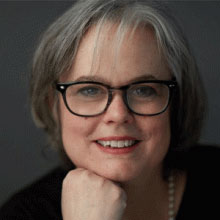 Elizabeth Jensen is a New York City-based freelance journalist, whose work appears in newspapers, magazines, online and on air. She previously covered the business of food and alcohol for the Wall Street Journal, writing front-page articles on the battle of the high-end steakhouse chains and industry efforts to get consumers to drink more wine. A longtime reporter on the media, she has chronicled the ups and downs of the Food Network for the Journal and the Los Angeles Times, where she was on staff, and The New York Times, where she has been a regular contributor since 2005. Jensen is the recipient of a 2005 Kiplinger Fellowship in Public Affairs Reporting at The Ohio State University, where she researched the politicization of public and commercial broadcasting, research that ended up published in The New York Times and Columbia Journalism Review. Her favorite piece of her career remains A Puff Piece, her CNBC newsmagazine investigation into the shady world of vegetarian marshmallow fraud.