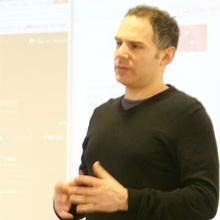 Rob Cameron is the BBC’s correspondent in the Czech Republic and Slovakia, covering politics, human interest stories, arts and other issues for BBC Radio, BBC TV and BBC Online. Rob moved to Prague in 1993. He began his radio career in 1999, when he joined Radio Prague, the international service of Czech Radio, to which he remains a regular contributor. Cameron began reporting for the BBC in 2001, and became the BBC’s Czech and Slovak correspondent in 2004. He has also reported for the BBC from Albania, Poland, Russia and the United States. He is currently working on a book based on a three-week journey across the Czech Republic by slow train.