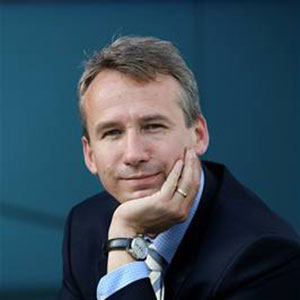 Tomas Klvana is a visiting Professor at New York University in Prague and Management Consultant at InReach Global Consulting, where he specializes in stakeholder strategies and business communication. He is a founder and Vice-President of the Aspen Institute Prague and serves as Chairman of Editorial Board of Aspen Review Central Europe.

Dr. Klvaňa was a Shorenstein Fellow at the John F. Kennedy School of Government of Harvard University (2003). In 2012 he received the Distinguished Leadership Award for Internationals from the University of Minnesota in Minneapolis. Dr. Klvaňa served as the Press Spokesperson and Policy Adviser for President of the Czech Republic, Special Government Envoy for Communications of the Missile Defense Program, and between 2005 and 2010 he worked in various CSR and Regulatory Management functions with British American Tobacco in London, Hamburg, Prague and Brussels. He holds a Ph. D. from the University of Minnesota in the U.S. (1997) and an M. A. from Charles University in the Czech Republic.