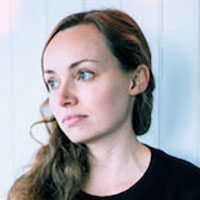 Annie Avilés is an independent journalist, and a visiting scholar at the Arthur L. Carter Journalism Institute. Annie works in both print and sound, and reports from across the Americas. Her radio work can be found on All Things Considered, Marketplace, Morning Edition, and Radio Ambulante, where she’s a consulting editor. Her essays appear or are forthcoming in The Atlantic, The California Sunday Magazine, Harper’s, The Nation, Pop Up Magazine, and The Virginia Quarterly Review. Annie also teaches journalism, and her classes and talks have been featured at UC Berkeley, IDEO, the L.A. Public Library, and other institutions.

Annie has a degree in anthropology from Smith College. She got into journalism after graduation, first working as a fixer in Bolivia, where she’d moved to do a Fulbright. After finishing the fellowship, she stayed on in the region, and spent several years as a regular contributor to National Public Radio, filing dispatches from across Latin America. Some of the investigative stories she’s reported include: the cover up of oil spills in remote parts of the Amazon, money laundering in Bolivia, the rebirth of Shining Path in Peru, a mining disaster that left thirty-three miners trapped in northern Chile, urban conflict in Brazil, and state sponsored violence in Honduras. Her work has received generous support from the Fulbright Program, Middlebury College’s Fellowship in Environmental Journalism, The International Reporting Project, and The Investigative Reporting Program at UC Berkeley.

Annie will spend her time as a recipient of the Award reporting on coastal zoning and climate change in the United States. Her work will focus on remote fishing communities and vacation towns in northern New England, looking at how flooding and global warming stand to transform the coast, and the lives of people who live there, with a specific emphasis on property values, and access to flood insurance.